Home > Methods > The Comic Book in the Age of Digital Reproduction: Critical Reflections

The Comic Book in the Age of Digital Reproduction: Critical Reflections

The process of digitization, central to any online archive, covers up as much as it reveals and limits as much as it enables. The critical theorist Walter Benjamin succinctly gave a name to this trade-off in his much-discussed essay “The Work of Art in the Age of Mechanical Reproduction,” published in various versions between 1935 and 1939. In the translated version included in Illuminations (1968), Benjamin argues that a work of art reproduced mechanically, such as a photograph or a film, lacks at least “one element: its presence in time and space, its unique existence at the place where it happens to be.” The reproduction of images thus obscures the authentic physical being of the work of art – its, as Benjamin famously calls it, “aura."

Yet Benjamin’s text, and modernisms more generally are decidedly not eulogies for the withering of the aura. Instead, Benjamin argues that we reap two distinct benefits from the mechanical reproduction of artworks. First, he argues, photography “can bring out those aspects of the original that are unattainable to the naked eye yet accessible to the lens, which is adjustable and chooses its angle at will.” Technology enables us to see things potentially invisible in an original. Second, he continues, technical reproduction “enables the original to meet the beholder halfway, be it in the form of a photograph or a phonograph record.” People know the face of the Mona Lisa not (necessarily) because they’ve traveled to Paris to see it, but rather (more likely) because the image has traveled to them through some mechanical or digital medium. Apperception and accessibility in exchange for the spatio-temporal specificity of the original – we may say that the same bargain is involved in the digital reproduction of images, including the comics contained in this online archive. 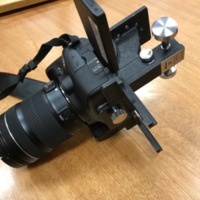 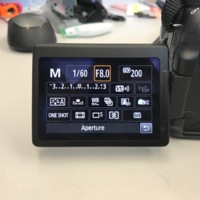 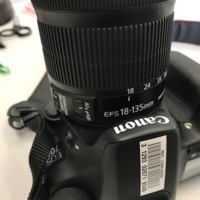 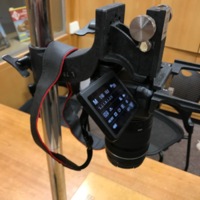 Setting up and configuring the camera.

How – if at all possible – can we retain this negativity - the physical, individual, material element of theses comics, which is excluded in digital photography - in their online archive? While there is no way to correct for this negativity, the digital medium offers ways of rendering it visible. In this post and throughout this project, we attempt to point to the elements of the comics lost in the process of digitization 1) by making explicit the technical specifications used during digitization and 2) by including reflections on the experience of holding, reading, and photographing the photographed comics.

Take, for example, the labor done by project members in digitizing the comics. As digital humanists have noted (see Anderson et. al. 2016), the rhetoric of openness in DH often obscures the student labor that goes into creating digital projects. Indeed, the images of the comics on this site alone do not reveal anything about the labor – training, preparation, digitization, and post-production – that brought them from MSU’s Special Collections to this online collection. In order to signify this labor, we included each the name of each digitizer under the category “Digitized by” as well as a link to this description of the process of digitalization in the comic viewer as a trace of the students' labor. Likewise, in order to remind viewers of the physical dimension of the comic, we also designed the comic viewer to display a link to the source material at Michigan State University Library’s Special Collections, which was the basis for the digitizaiton. 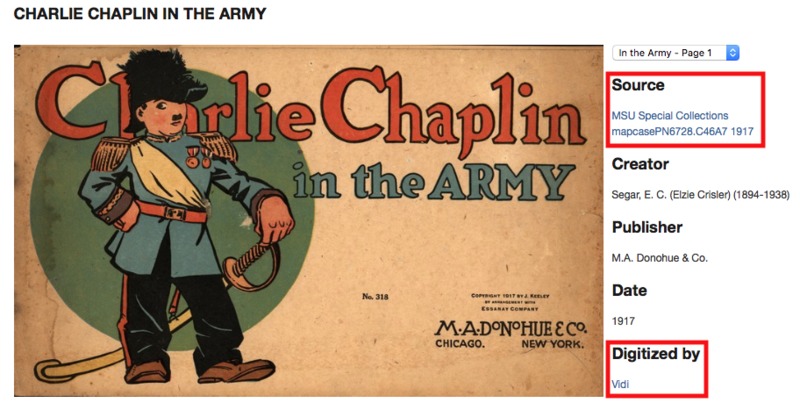 Links to the physical object at MSU and to a description of the work invovled in digitization.

Text and metadata, of course, can never fully capture the experience of the material object or the labor that went into its digitization. Nonetheless: by linking to a discussion of the process of digitization, directing users to the location of the material object and including reflective and analytic texts on our digital methods, “Critical Comics” attempts to make the negative dimension of the digital - the erasure of the object’s materiality and the students’ labor - visible.

Members of AL 340 and DH 340 (including the professor) each digitized at least one of the fifteen comics housed on this site. With the help of Randy Scott, assistant head of Special Collections, students each chose a comic that is incontestably in the public domain (i.e. was published before 1923) and was in a condition stable enough to allow for digitization. The processes of digitalization evolved between 2017 and 2018, reflecting the changing DH resources available for digital humanities projects at MSU.

In 2017, the students photographed the first ten comic books contained in this digital archive, color corrected, cropped, and uploaded them to archive.org. Each student took between an hour and two hours to photograph the comic, including setting up the camera and lights, calibrating the camera, photographing the document, and closing down the photography stand. Included in the photograph are a color checker and the Special Collections bookmark, which contains bibliographic data pertinent to the document.

Our technical equipment included a Nikon Repro Copy PF-1 copy stand and Canon EOS 70D digital camera, both borrowed from Michigan State Library. We set white balance for each session with a X-Rite Color Checker Passport. We calibrated the camera according to the following predetermined settings:

Students then color corrected the Canon CR2 files, saving them as a full sized TIF. They then cropped the images to include only the comic (as displayed on in our archive). Students then uploaded the JPGs to archive.org. The copped JPGs, along with the TIFs and CR2 files, can be found on archive.org.

In 2018, the course benefited from the recently opened Digital Scholarship Lab at MSU (DSL). We used the DSL’s Plustek OptiBook A300 flatbed scanner to digitize the five new comics for the second iteration of the project. Students again took about an hour to two hours to digitize their comic. While it was more difficult to reposition the comics while scanning, the Plustek scanner both color-corrected and straightened our images automatically as well as allowed us to crop the images directly in the scanner interface. Students scanned both high-scale TIF master images as well as JPG derivatives, which are displayed on the website. The settings for the OptiBook A300 scanner were:

As in 2017, students then renamed all their files and uploaded both the master TIFs and derivative JPGs to archive.org. Both the TIFs and JPGs can be accessed at archive.org.

The following quotes are excerpts from reflective essays written by the students. After having completed their work in Special Collections, they were asked to read the comic in its new digital form and reflect on the difference of reading the comic as a physical book versus on a computer screen.

Anne: “The embodied sensation triggered by the material experience of reading the comic are lost once it is read online. What I mean by that is for example the feel of the paper, it's fragility and texture. When I touched the pages of the comic I could tell that the paper was old and that it had lost its flexibility. While the digital copy also allows you get a sense of the fragility of the paper, the immediate sensation of its abrasive feel and delicacy is lost. Along with the haptic dimension of touch, the sound of handling the material is also lost. When I brushed my fingers over the comic, the encounter between the skin of my finger and the abrasive paper created a specific sound that cannot be compared with brushing over new paper.”

Cassidy: “I could determine the thickness and quality of the paper and I could see the printing of the color, as well as the individual dots that made up the color. Because the comic was in my hands, I know how big it was, how heavy it was, and how fragile it was. I also enjoyed being able to flip through the physical object, and being able to analyze every inch as much as I wanted; I really felt like I’d completely experienced the comic.”

The digitization process, before cropping.

Erin: “As I […] photograph[ed] the comic, I noticed more and more how many minute tears there were in its pages. As I flipped the page again, I wondered who it was that started the tiny tears. Did they know they were ripping a book that would be preserved in a Special Collections library someday?"

Nicole: “When reading our comics in person at Special Collections, I was really aware of how old the strips were, because their physical form was “withering away,” in a sense.  While all the comics we looked at were in relatively good shape, my comic’s pages were beginning to rip on the edges, and turning the pages proved to be somewhat difficult.  It was hard to get the pages to lay flat, without creasing or ripping them apart.  As with most older works, my comic also had a distinct scent, that signified its age.”

Rachel: “The experience that I had reading my comic online verse reading my comic in Special Collections was very different. When reading my comic in Special Collections, I found that it took me longer to read because I had to be careful with all of the pages. The book was not bound together so I had to keep track of all of the delicate pages and make sure to keep them in the correct order. I was able to see all of the little marks on the pages that are not easily noticeable on the digitized version. The comic seemed more personal because I was able to interact with it, which also helped me realize how old the comic actually is.”

As users browse and read through the comics on this site, these reflections serve as critical awareness for the trade-offs involved in but also obscured by the process of digitalization.