Online Archives between Fidelity and Utility

When creating an archive there is the challenge of making sure the data and text are historically accurate and truthful to the best of our knowledge, since a lot of information and personal connection can be lost when translating physical objects into data and onto an online platform. As we were creating our archive, we considered some of the discussion topics brought up in AL340. These topics included critical theory, the archive, and data structures, and determined a few of the main points that we wanted to be sure to incorporate when building the site. One of the readings was “Archive Fever, Archive Stories” by Antoinette Burton. It focuses on archival theories when creating physical and online archives. As the reading mentions, this a problem that is often encountered. For this site, we as the creators not only had to build an archive we felt worked the best, but also suited our users needs the best and fit the constraints of Omeka. Another reading was “Archive Fever, Archive Stories” by Antoinette Burton. She states to keep into consideration that not only “professional partitions” or “political elites” will be the ones “engaging with the limits and possibilities of the archive” (2). The goal of the website is so that it can be used by anyone with an interest in comics and/or the MSU comic collection, whether for academic pursuits or personal reasons, and our goal was to make this a collection that all of those people can access and engage with. It is important for our archive to be used and for the readers to understand how it was created.

To digitize the comics, each student set up a camera on a copy stand in a provided photographing space in Special Collections. A Canon EOS 70D camera, with the settings F-stop at 8, shutter at 1/60, ISO at 200, and file type RAW. The camera was secured above the comic with two lights at a 45 degree angle for extra lighting, allowing the students to capture well-lit photos of their comic. This process, depending on the length of the comic, took around an hour to an hour and a half. For the next step, each student uploaded their photos to a computer and used Photoshop to edit, correct color balance, and crop the photos. This procedure provided the most accurate and detailed view of the comics. Finally, the photos were resized from their original RAW file to a .jpg and .tif file and uploaded onto our archive for viewing.

We were able to visit the Michigan State University Special Collections and get a tour of where the comics are stored, understand how they are stored, and what the various comics look like. The comic collection is very organized, yet appeared to be a bit overwhelming with the copious amounts of comics that need to be stored. We were able to physically handle a few of the comics and even get an idea for what they were made of, smelled like, and the texture of the pages on how they felt.

When going through our data, the first thing we noticed that there were a lot of fields that were missing information for most of the comics, the information was not understandable to the everyday person who may be looking at the site, or it was not useful information to provide to our users. Such extra information would simply clutter things up and one of the goals for the site is to be as user-friendly and as helpful for future research as possible. An example of one of these fields was MARC subject field 49, which is an unassigned subject field.  This means that the library has assigned it for its own local purposes. We did not completely understand what the library uses it for, and certainly neither would our users as well. For these topics, we felt they did not benefit or serve the interests of our site and deleted those data points. As we began matching up MARC titles with Dublin Core titles, we noticed that there were multiple data points for the same topic (i.e. personal name vs. author name vs. author). For those situations, we matched the MARC title to the closest Dublin Core title and then selected that data point to keep. In one case, we decided to keep personal name, which then when putting it into the site, became “creator.” The other ones were deleted as they were simply duplicates. 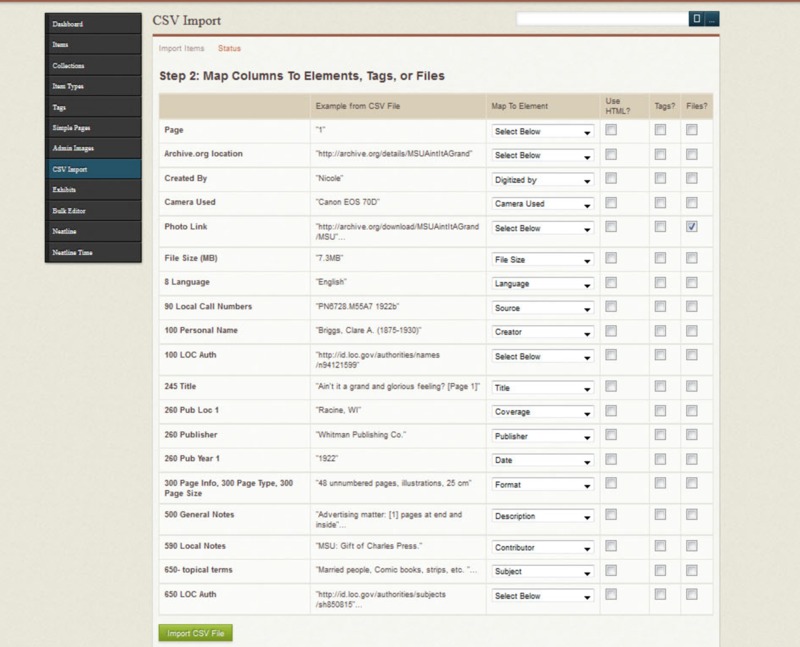 However, during our sorting of the data and the matching process, we ran into a few issues. We initially thought that we were able to rename Dublin Core titles to match MARC titles. This would help create more specific Dublin Core titles. With that in mind, we started to look at and determine if the title of a subject needed to be altered or renamed for the sake of clarity and understanding, and if so, we tweaked it in a way that made it the most accessible to the public - as in, what title would be the most universally understood. For example, one such subject was called “Pub Loc 1” which is not only abbreviated but really doesn’t make much sense to the reader. Under the Dublin Core, we classified this as “Coverage” but that also wouldn’t mean much to our users, so we chose to change the title to “City of Publication.” This is a very clear and straightforward title, making it easier for people to find and understand. The goal in doing this was to break apart the standard methods of data collection and display so that it would be possible to analyze the data from varying points of view and hopefully come to new understandings. We continued with this process for the rest of the data, finding the Dublin Core title that is most closely related to the MARC title, and then decided if there was a more understandable title we could name it. Furthermore, we wanted to break the constraints of Dublin Core titles in order to analyze our data from unique points of view relating to critical theory and Posner’s idea that how we structure our data can determine the output and conclusions we come to.

Although we did originally go through this renaming process, we realized there were certain standards with Dublin Core and our host site that did not allow us to reclassify and retitle categories. This meant taking a step back in our approach to our data, and simply determining what Dublin Core title would make the most sense (as we had originally done). Even though we were unable to rename Dublin Core titles because of digital humanities and library standards with Dublin Core, the process helped narrow down our data and allowed us to correctly make the transfer between MARC and Dublin Core titles and categories. The data collection process was then much more efficient due to Omeka’s ability to match up the categories we labeled with Dublin Core titles and transfer the data. We were able to decide what data was most important and what should be kept based on titles and the interest to our users. The process also helped us familiarize ourselves and learn more about the data and what each title stood for. Furthermore, the tradeoff of between having less precise categories was that it was more efficient to not have to rename the categories. It made the process of adding the data into the site much easier for us. The site we were hosting on automatically gave Dublin Core titles to our data, and if we had gone with the renaming process, we would have had to manually go into the site and rename the categories for each piece of data. While we were disappointed that we could not rename the Dublin Core titles, as this limited us in our freedom to analyze and label the data in ways we believed would be more understandable and user-friendly, it did make things simpler in the end.

It was important for us to remember the stories that come along with the comics, like who owned them and how they arrived at the Special Collections Comic Art Collection. It is also important to realize that archives acquire a new kind of character once digitized. The online archive leaves out the original aura of the comics, how they feel, smell, the texture of the pages, and even the size of the comic. Although, the benefits to the archiving comics are being able to pull out quotes or find information within a second and make it widely accessible to those that may not have had access to the archive before.

One way we are trying to transmit our experience of the archive to an online experience is by capturing the importance of the comics in a simple user-friendly design. This communicates all the fundamental elements of our website to our users and creates a positive experience in an environment conducive to studying comics and data.  We wanted to draw away from the Special Collections archive by creating a less overwhelming experience. We wanted to translate some of the original aura of the archive to the online site by adding visualizations. Photos of the comics show some of the authenticity like torn pages, the colors that were used, and if the pages had certain textures. Data was added to provide more in-depth detail to understand the process that was taken to create the archive. The visuals allow the audience to easily flip from page to page without having to worry about breaking a page or damaging the comic book and it is easier to access a specific page very quickly.  These decisions were made in hopes to help the user have good experience with the archive and to substitute for the missing aura. Our goal was to provide a helpful and educational resource for those looking to do research on the topic of comics through this archive. For more information on these comics, you can visit Special Collections in the Michigan State University library or the Comic Art Collection website.